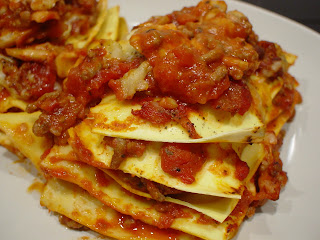 METHOD
1. Heat oven to 180 degree C.
MEAT SAUCE
2. Heat oil in a large frying pan, and cook onion and garlic until onion is golden. Add meat and brown well. Stir in mushrooms, tomatoes, tomato puree, oregano, basil, and sugar. Bring to the boil then reduce heat and simmer gently for 40 minutes or until meat mixture has thickened slightly, stirring occasionally. Season with salt and pepper to taste. Set aside until cool.
CHEESE SAUCE
3. Melt butter in a saucepan. Add flour and cook until frothy. Gradually add milk, stirring constantly until mixture boils and thickens. Remove from heat. Stir in cheese. Season with salt and pepper to taste. Cover with a lid or plastic wrap to prevent a skin forming. Set aside until cool.
LASAGNE
4. Place half the lasagne in a greased ovenproof dish. Spread with half the meat mixture and half the cheese sauce. Repeat the layers. Top with parmesan cheese. Cook in the oven for 20 minutes or until golden and heated through.