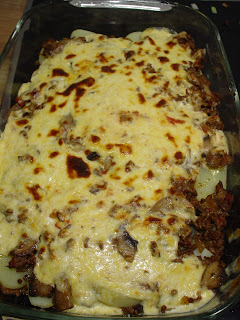 METHOD
1. Boil the potatoes in salted water until just tender.
2. Fry the onion in the oil, then add the garlic and mushrooms and cook until browned. Add the mince, stirring to break up any lumps, and cook for 1 more minute. Add the wine and tomatoes and simmer for 15 minutes. Stir in the parsley and season.
3. Spoon half the mincce into a heatproof dish, add the postatoes in a single layer and then the rest of the mince.
4. Mix the cheese with the creme fraiche and season. Spoon over the top. Put under a hot grill for 3 minutes, until browned and bubbling.
No comments: Links to this post 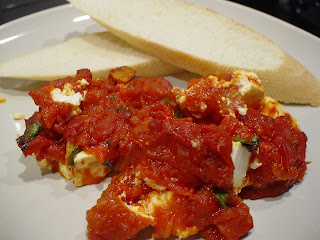 You may want to leave the dish under a hot grill for a few minutes to give it a little more color.

METHOD
1. Heat the oil in a pan, add the garlic and cook for 1 minute. Add the chilli flakes and tomatoes and simmer for 25 minutes until thickened. Season and stir in the oregano.
2. Heat the oven to 180 degree C. Put the feta in an ovenproof dish, cover with the sauce and bake for 20 minutes. Serve with warm crusty bread.
No comments: Links to this post 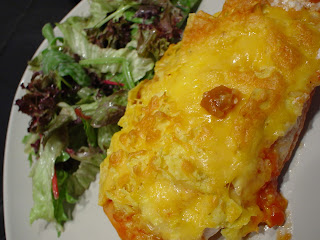 I halved the ingredients and added jalapenos pepper for extra kicks.

METHOD
1. Heat oven to 200 degree C. Put the chicken breasts on a non-stick baking tray, season, then slash each 3 times with a knife. Mix the jalapenos pepper into the salsa. Spoon 1 tbsp of salsa on top of each, then 1 tbsp sour cream.
2. Sprinkle the chips over the chicken, then the cheese. Roast for 30 minutes until the topping is golden and melting.
No comments: Links to this post 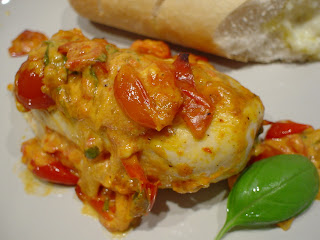 I halved the recipe ingredients and served this with garlic bread.

METHOD
1. Heat the oven to 190C. Fry the onion and garlic in about 1 tbsp olive oil until softened but not colored. Add the tomatoes, season, then simmer for 10 to 15 minutes or until thick and glossy. Take off the heat and stir in the mastcarpone and half the basil, roughly torn.
2. Heat a little oil in a pan and fry the chicken on both sides until golden. Transfer to a baking dish and pour over the sauce. Cook for 25 to 30 minutes or until the chicken is cooked through. Scatter over the rest of the basil.
No comments: Links to this post 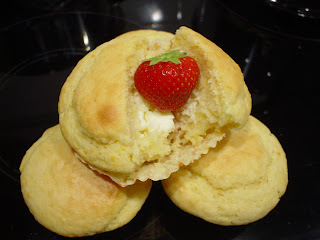 METHOD
1. Heat oven to 190 degree C. Line 12 muffin cups with paper muffin liners.
2. Beat together cream cheese and powdered sugar until smooth, set aside.
3. In a large mixing bowl, combine flour, baking powder and salt. In a separate bowl, beat together egg, milk, brown sugar, butter, lemon zest, and vanilla extract. Stir egg mixture into dry ingredients, stirring just until moistened.
4. Spoon half of batter into muffin cups. Top each portion with 1 tbsp cream cheese mixture and 1 tsp jam. Spoon remaining muffin batter on top.
5. Bake in preheated oven for 20 minutes, or until golden. Cool in pan for 5 minutes, then remove muffins and cool on rack. Store in airtight container.
No comments: Links to this post 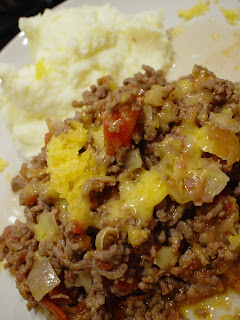 You could prepare more caramelized onions and then freeze them for making omelette or sandwich later. My friend and I made this dish together, and we made some sour cream mashed potato to go with this too. Nigella suggested lamb mince instead, but beef mince is cheaper and tastes as good!

METHOD
1. Heat the oil in a medium-sized saucepan, and fry the cubed pancetta until beginning to crisp.
2. Add the meat, breaking it up with a fork in the pan as it browns.
3. Tip in the caramelized onions, Marsala, tomatoes, lentils and wwater and bring the pan to the boil.
4. Simmer the ragu for 20 minutes stirring occasionally. Sprinkle with the cheese before serving.


* How to make caramelized onions - ingredients can easily doubled for more.
1. Melt 1 tbsp butter in a medium-sized pan set over low heat. Add about 3 thinly sliced onions, a generous pinch of salt, and 1 tsp honey. Stir every now and then for even cooking.
2. If the onions dry out, add in a splash of water to keep the onions from burning. Keep cooking over low heat until onions are golden brown, about 20 to 30 minutes.
No comments: Links to this post 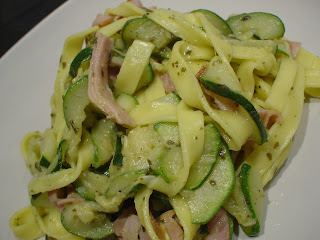 METHOD
1. Heat the oil in a largee wok. Add the garlic and courgettes, and fry over a high heat for about 3 minutes until soft and lightly browned. Add the ham and toss together for 30 seconds, until it has heated through.
2. Add pasta to the courgettes with the pesto, and season with salt and pepper. Toss well and serve.
No comments: Links to this post 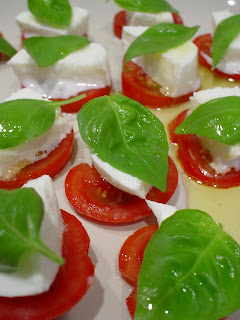 Email ThisBlogThis!Share to TwitterShare to FacebookShare to Pinterest
Labels: Starter 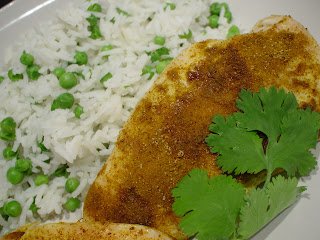 I did not add the cinnomon stick and raisins to the rice, as my husband and I are not big fans of sweet-ish rice. So I simply cooked the rice and peas in chicken stock instead. Also, I fogot to get red onions and hence skipped the crisp red onions.

METHOD
1. Heat the oven to 170 degree C. Brush the chicken with 1 tsp of the oil, then sprinkle with the curry powder. Put the chicken in one layer in a roasting tin. Bake for 25 minutes, until the meat is cooked.
2. Boil the rice in a pan with the chicken stock. Cover, then gently cook for 10 minutes until the rice is tender, adding the peas halfway through the cooking time. Spoon the rice onto two plates, top with the chicken. In a bowl, stir the coriander into the yoghurt and season. Serve the herby yoghurt on the side.
No comments: Links to this post