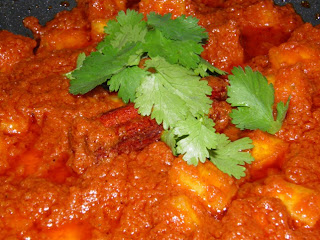 This dish is from Jammu and Kashmir. Last time when I fried the paneer for my palak paneer dish, it was quite a disaster as the paneer cubes were broken and they stuck a bit to the pan. So this time I used more oil and waited till the oil was piping hot before putting the paneer in. The paneer fried beautifully, but I think I fried them too long as they were a little too hard. Next time will be better!

METHOD
1. Heat the oil in a large pan over medium heat, add the paneer and fry golden brown all over. Remove with a slotted spoon and drain on kitchen paper. Add the whole spices to the pan and stir fry for about 1 minute.
2. Add the pureed tomatoes to the pan and cook for about 5 minutes, or until all the liquid has evaporated. Pour in 1/2 cup hot water togehter with all the ground spices, except the garam masala, and season with salt. Bring to the boil and add the paneer. Reduce heat to low and cook for 5 minutes.
3. Sprinkle over the garam masala and stir gently, then simmer for a further 2 to 3 minutes. Garnish with coriander leaves.

Email ThisBlogThis!Share to TwitterShare to FacebookShare to Pinterest
Labels: Indian, Side dish, Vegetables