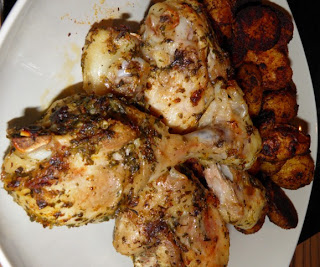 METHOD
1. Heat the oven to 220 degree C. Slash each drumstick 2-3 times.
2. Finely grate the zest from 1 lemon and squeeze the juice from both. Mix in a shallow dish with the tarragon, 1 tbsp of oil and some salt and pepper. Add the chicken and turn to coat in the marinade.
3. Spread the potatoes over a roasting tin. Toss in the remaining oil and sprinkle with paprika. Cook in the oven for 15 minutes.
4. Lay the chicken drumsticks on another roasting tin. Place the tin with potatoes to the bottom rack of the oven, and the tin with chicken drumsticks in the middle rack. Roast for 40 minutes until the chicken is well browned. (check on the potatoes halfway, and cover them with foil if they get too dry)