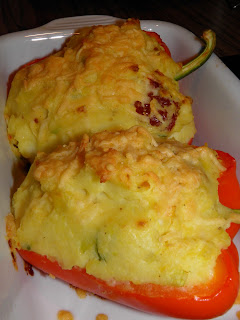 I took out the olives from the recipe as my husband doesn't like them. A dash of tobasco sauce is recommended if you like it hot!

METHOD
1. Heat oven to 200 degree C. Cook the potatoes in boiling water for about 10 minutes. Drain and mash into a puree. Stir in creme fraiche, dried tomatoes, green onions, and half the cheese. Season with salt and pepper.
2. Stuff the peppers with the mashed potato, and put them in a greased baking dish. Scatter the cheese all over the stuffed peppers, and bake in the oven for about 30 minutes until golden brown.

Email ThisBlogThis!Share to TwitterShare to FacebookShare to Pinterest
Labels: Side dish, Vegetables