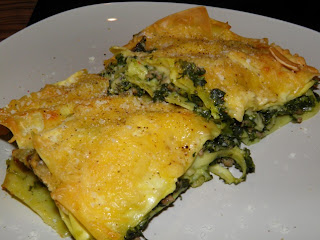 I planned to make cannelloni, but unfortunately, the lasagne sheets were a bit dry and all stuck together. I tried to Google ways to rehydrate lasagne sheets to make them softer and easier to separate/roll, but couldn't find any. My husband tried to help out but got increasingly frustrated when every single sheet was broken. So I took his advise and turned this dish into a lasagne instead. The result was not bad at all!

METHOD
1. Heat the oven to 200 degree C. Heat 2 tbsp of oil in a pan and brown the minced beef for about 8 minutes. Stir occasionally.
2. In another pan, heat the remaining oil and brown the garlic for about a minute. Add the frozen spinach and heat over low heat. Season with salt and pepper. Drain the spinach well. Mix the spinach with the minced beef.
3. Spread a layer of spinach-meat mix in a greased casserole dish, followed by a layer of lasagne sheets, another layer of spinach-meat mix, and then another layer of lasagne sheets. Top the lasagne with the grated cheese. Cover the dish with foil and cook it in the oven for 20 minutes. Remove the foil and cook for another 10 minutes until the top is golden brown.