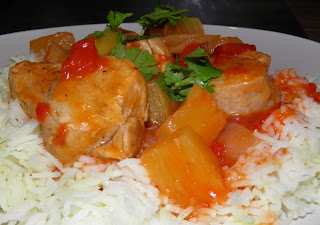 The sauce reminded me of this Cantonese dish, Koe lo yuk (咕嚕肉), but a less tasty version. I was not that crazy about this dish, and my husband said "it tastes like Hawaii pizza". What more can I say?

METHOD
1. Heat half the oil in a large frying pan and fry the pork for 5 minutes, until golden, but not cooked through. Remove the meat and set aside.
2. Heat the remaining oil in the pan, add the onions and fry until soft. Tip in the pineapple, 3 tbsp of the syrup, the ketchup, tomatoes, stock and cinnamon stick. Bring to the boil, then simmer for 10 minutes, until the sauce has thickened slightly. Add the pork to the sauce and simmer for about 4 minutes. Remove the cinnamon stick.
3. Add the cornflour water to the pan and stir over a medium heat, until thickened.