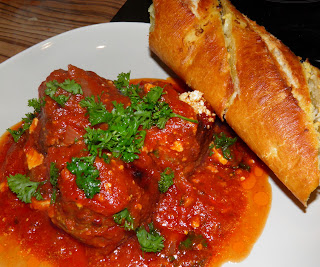 The original recipe is called "Istanballen", the literal translation is "Istanballs". I thought juicy meatballs can never go wrong, but my meat-loving husband's only comment was "they just don't taste like meatballs". Lesson learned - meat and cinnamon just don't work for him! I admit that the touch of cinnamon is quite unique in a beef dish (though a dash of cinnamon works like a charm in a minced lamb dish), so I have already lessened the amount of cinnamon from 2 tbsp to 1/2 tsp this time. Next time I may simply up the oregano and skip the cinnamon.

METHOD
1. Heat oven to 200 degree C. In a medium-sized bowl, mix the egg, bread crumbs, 1 tbsp oregano, half the cinnamon powder, and minced meat together. Season with salt, pepper, and the red pepper paste. Finally mix the feta cheese into the meat mixture. Make into 8 meatballs.
2. Heat the oil in a pan, and brown the meatballs. Remove from the pan (leave the yummy meat juice/oil in the pan) and into a baking dish. Add the onion to the pan and brown for 2 minutes. Then add sieved tomatoes, 100ml water, the rest of the cinnamon, and 1/2 tbsp oregano. Mix well and cook for about 3 minutes. Pour the sauce over the meatballs in the baking dish.
3. Cook the meatballs in the oven for 30 minutes. Remove the dish from the oven and let it rest for 5 minutes. Sprinkle with the chopped parsley and serve with grilled aubergine or garlic bread.