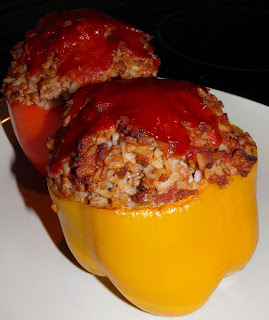 I found the filling a little bland so have added some sauce to it before stuffing the peppers. Next time I may try topping the stuffed peppers with a mixture of HP sauce and Worcestershire sauce instead - it should go really well with the minced beef!

METHOD
1. Add several generous pinches of salt to a large pot of boiling water, then add peppers and boil about 3 minutes until brillliant green/red/yellow and their flesh slightly softened. Drain, set aside to cool.
2. Heat oven to 175 degree C. Heat 4 tbsp of oil in a pan over medium heat, cook onions for about 5 minutes. Remove skillet from heat, add meat, rice, tomatoes, and oregano, and season generously with salt and pepper. Add 1/2 tsp of Worcestershire sauce and 1 tbsp of ketchup. Mix well.
3. Drizzle remaining 1 tbsp of olive oil inside the peppers. Stuff peppers with filling and arrange them in a baking dish. Combine 1/2 cup ketchup, 1/2 tsp Worcestershire sauce, tabasco sauce, and 1/4 cup water in a small bowl. Spoon the sauce over the filling.
4. Add 1/4 cup water to the baking dish. Bake in the oven for about 50 minutes, depending on how big the peppers are, until the internal temperature of the stuffed peppers is 65 degree C.