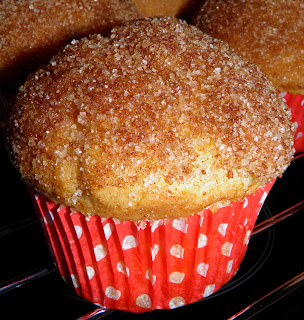 I added a dash of cinnamon to the batter too to give the muffins a warmer flavor. They are really fun to make - but watch out when rolling the muffin tops in the melted butter for the topping, because they are REALLY HOT!

METHOD
1. Heat oven to 205 degree C. Line muffin tin with 12 paper cups.
2. In a medium bowl, beat milk, butter, and egg. Add in flour, sugar, baking powder, cinnamon, and salt all at once. Stir just until flour is moistened - note that batter will be lumpy.
3. Use two spoons to fill muffin cups 3/4 full. Bake until golden brown, about 16 miutes. Immediately remove from pan and carefully roll hot muffin tops in melted butter, then in cinnamon-sugar mixture.